The Suez Canal, a logistics hub for world trade 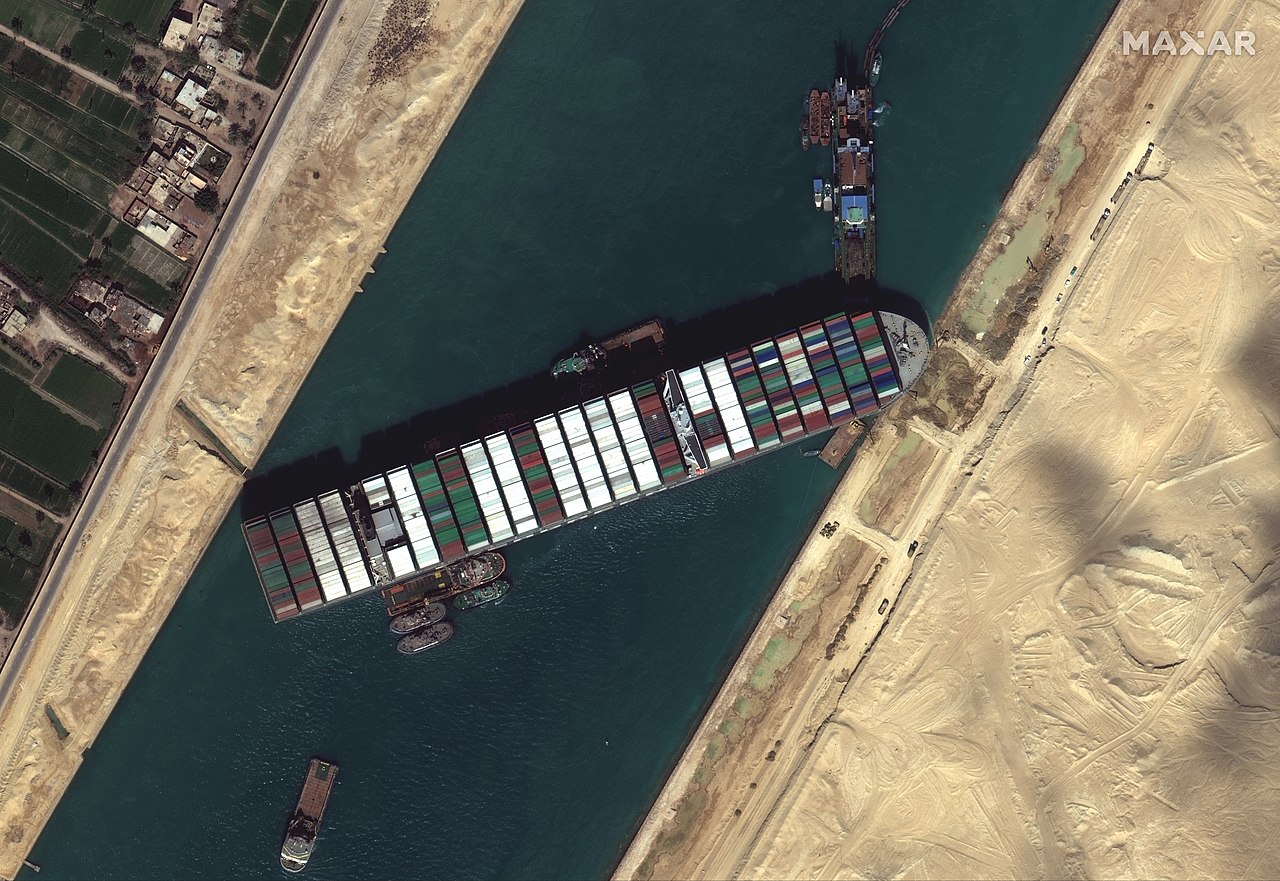 Let’s imagine for a moment that we can’t walk down our driveway and have to go all the way round the block to get into the house with our shopping bags. Every day, several times a day. Let’s also imagine that we have to circumnavigate Africa with giant container carriers to bring raw materials and semi-finished products from Asia to Europe. If we look at it this way, it is not difficult to judge the impact that the Suez Canal has on the life of every citizen and the role it plays in world trade. It took the largest naval traffic jam in history to underline the importance of an infrastructure born in Egypt in the second half of the nineteenth century. On March 22nd the 400-meter-long cargo ship Ever Given, Japanese-owned but flying the Panamanian flag, ran aground across the Suez Canal, blocking the passageway. It had set sail from China and was heading for Rotterdam. It was carrying hundreds of containers: shortly after entering the canal from the Red Sea, a sudden gust of wind diverted it off course, causing it to run aground with its bow on the east quay. It took six days of non-stop work to move the hull, free the ship thanks to the high tide and clear the passageway. Meanwhile, nearly 400 ships, including dozens of oil tankers, were waiting to pass north- and southwards through the canal.

Images of the Ever Given made their way all around the world, not only because the news was so unusual, but also because it was a story that indirectly involved thousands of companies and millions of citizens. It was only thanks to the engineering work and the speed of the port authorities that the impact on trade was minimized. Suffice it to say, the Suez Canal still guarantees about 7 percent of world merchant traffic and 12 percent of all goods on the planet pass through its waters. Not to mention its strategic value, as it is located along one of the busiest oil routes. With the works in 2010, the canal was lengthened up to 193 km, with a width of 205 meters and a maximum depth of 24 meters.

The first hypothesis in Ancient Egypt

The Suez Canal has a very ancient history. Historiography traces the first idea of a connection between the Red Sea and the Mediterranean Sea back to the 18th century BC. with irrigation projects under the reign of Pharaoh Senusret III. Throughout history, Roman rulers and occupiers used the “Pharaohs’ canal”, widening it and improving its safety. The remains of the infrastructure were also found by the Napoleonic troops during Bonaparte’s famous expedition to Egypt. For years, the commander himself studied how to open a passageway in the Mediterranean to get the upper hand over the British Empire, which at the time dominated the seas and controlled the crucial junction of Cape of Good Hope on the Asia-Europe route. However, it was a French diplomat, Ferdinand de Lesseps who, in 1854, obtained the concession for the construction of the canal from Said Pascià, ruler of Egypt. The construction, according to a design by the Italian engineer Luigi Negrelli, began in 1859 and lasted ten years: a 164 km long, 53 meter wide and 8 meter deep route was built. The official opening took place on November 17, 1869 with a major event that was also attended by members of the European aristocracy, including the Austrian emperor Franz Joseph.

It did not take long for even Great Britain, initially opposed to construction, to realize the immense scale of the infrastructure. It was not for nothing in fact that it began acquiring shares in the Suez Company and in 1888 the canal ended up under the protection of the British crown.

A crucial and strategic junction

From the very start, the Suez Canal had an exceptional impact on freight traffic. Soon the time taken to pass through the canal went from 40 to 12 hours. Caravans were organized, that is, daily journeys of large groups of ships all in a row, with the alternate one-way system. The approximately 500 transits in 1870 reached, in less than a century, over 20,000. The Suez Canal currently guarantees an average of 18-19,000 transits per year, but compared to the 1960s the tonnage of ships has tripled.

The evolution from the post-war period to the present day

The canal was also used for the transport of passengers and in its period of maximum expansion, at the end of 1945, it was able to guarantee a safe passage for almost a million people and thousands of vehicles. It was also for this reason that during the two world wars it became a British garrison to defend. In 1956, the nationalization of the infrastructure by the Egyptian president Gamal Abdel Nasser, triggered the Suez crisis which led to the invasion of the country by the United Kingdom, France and Israel. Tensions subsided after eight days and Western forces were forced to retreat, also due to pressure from the United States and the Soviet Union. The canal was the scene of several wars between Israel and the Arab countries: in 1967, the Jewish state’s troops occupied one of the two banks and the passageway was closed for eight years.

In addition to revolutionizing world trade, the Suez Canal has a strategic value of the highest order. It is used by thousands of oil tankers arriving from the Gulf countries, and since the second half of the twentieth century it has become essential for Europe’s energy supply. In August 2015, the central section of the canal was doubled, adding a new 35 km long second lane and allowing the simultaneous passage of ships coming from opposite directions. In this way, daily transit was also doubled, going from 49 to 97 ships.